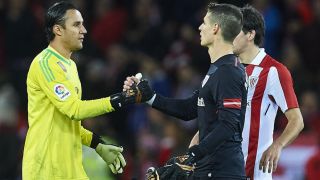 Zinedine Zidane is irritated by suggestions in the media that he won an internal "battle" over Real Madrid's alleged pursuit of Kepa Arrizabalaga after the goalkeeper signed a new deal with Athletic Bilbao.

Madrid had long been linked with a move for the highly rated 23-year-old, particularly since he entered the final six months of his previous deal at the start of January.

But the Spain international has opted to sign a contract extension with Athletic, seeing his release clause increase from €20million to €80m.

According to reports in Spain, Kepa decided to stay put due to Zidane's lack of enthusiasm in signing him, with the Frenchman preferring not to make any new signings in January.

It had been said that Zidane got his way, but he was eager to insist his previous comments were made with the intention of keeping his current goalkeepers happy.

"I said the other day that if the strategy of the club wants it, then all players can come in June," Zidane told a news conference on Tuesday.

"But my idea for the club – and we're working together – is not to change things at the moment and that's all.

"It bothers me a little when I hear comments saying that I've 'won the battle'. My main worry is my players and what they do at Real Madrid; the rest isn't my business and doesn't affect me.

"You know how it is, I face you [the media], explain to you my way of thinking. The important thing is that my philosophy is that I'm with my players - they're the important ones, the ones here. If they play and train well, then we'll do good things here.

"I need to protect my squad, but when I say that I mean because they're my players. I've nothing against Kepa or any other player. I never want to be seen like that."

Zidane was also asked about his recent usage of Isco, with the Spain international starting just one of the last four games in all competitions.

Take a look inside as the players put the finishing touches to their preparations for tomorrow's cup clash! January 23, 2018

The coach insisted there is no issue and is adamant the playmaker remains a crucial cog.

"He didn't play versus Barcelona, but that wasn't the idea. The idea was to play him, but we had a player sent off that day. It was a difficult situation.

"Now we're playing 4-3-3 and Isco can play in that system, he can also play behind a front two, so it's not a problem.

"Isco is clever enough to know his role here. He'll be important and he has shown that already, I think all my players have at some point."

Sergio Ramos trained with the first team on Tuesday after not featuring in a game since El Clasico on December 23 and Zidane confirmed he could be involved in the Copa del Rey quarter-final second leg against Leganes on Wednesday.