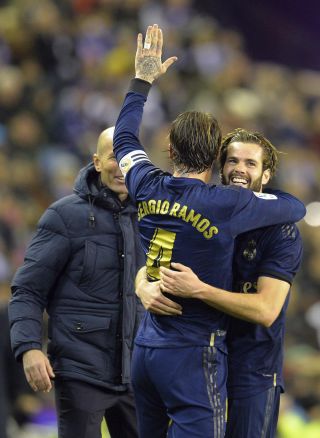 Real Madrid manager Zinedine Zidane was relieved to see his side edge past Real Valladolid 1-0 to move to the top of the LaLiga table.

It took a late strike from Nacho to break the deadlock after a disciplined defensive display from the hosts, who could have snatched a point at the end when Sergi Guardiola was denied by an offside flag.

Madrid midfielder Casemiro also had a goal ruled out by VAR in the first half but Zidane’s men did enough as they extended their unbeaten run to 12 games.

Zidane told reporters after the game: “They’re three important points against a team that never gave up.

“We knew that before the match and we played better in the second half.

“We went into it with a new dynamic. We were better in possession of the ball and with the rhythm of the game.

An impressive win for @realmadriden at the Jose Zorrilla as they go top of the table! 💜🔝💜#RealValladolidRealMadridpic.twitter.com/YnVVvv4yBl— LaLiga (@LaLigaEN) January 26, 2020

Los Blancos finally went ahead when Toni Kroos’ corner from the right was only half-cleared back to the German and his return cross into the box was headed home by Nacho.

Madrid were saved by the linesman’s flag with three minutes to go. Mohammed Salisu flicked on a corner from the left and the ball dropped for Guardiola to scoop into the net but he was marginally the wrong side of Kroos and VAR confirmed the official’s decision.