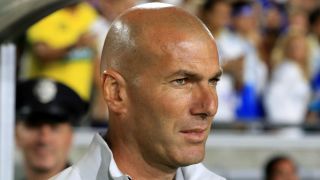 Zinedine Zidane hopes Cristiano Ronaldo, Gareth Bale and Karim Benzema all remain at Real Madrid, while the coach confirmed the club are "working on things" in the transfer market amid persistent links with Kylian Mbappe.

Madrid were beaten 4-1 by Manchester City in the International Champions Cup in Los Angeles on Wednesday, as they wait for the return of Ronaldo from an extended break following the Portugal captain's exertions at the Confederations Cup.

The 32-year-old had reportedly sought a shock move away from the Santiago Bernabeu amid scrutiny over his tax affairs in Spain, but a transfer has yet to materialise.

"Let's hope that all of the members of the BBC [Bale, Benzema and Cristiano] stay here," he said.

"I want the BBC to stay put, it's the same for all of the players who are here. That said, up until 31 August anything can happen."

While jealously guarding their own prized assets, Madrid have been tipped to break the world transfer record yet again to prise Mbappe away from Monaco.

Zidane, who previously attempted to sign the France international for Madrid's youth academy, was unwilling to offer an update on the alleged pursuit of the 18-year-old striker.

"I'm the coach here and you'd have to ask someone else about that," he said.

"We're working on things and we'll see what happens.

"We've got the players who are here now and we'll just have to see what happens."

Zidane confirmed Madrid had emerged from the loss to City unscathed, and was annoyed but not dispirited at coming off second best.

"I'm not happy about the defeat, obviously," he said.

"We didn't have a bad game but it's a bad result. We're still in the preparation stage, it's the second game. There's no need to keep talking about what has happened, we lost and that's that. They were a bit superior at important moments. Now it's time to rest, we have another game on Saturday and we want to have a better match.

"The good thing is that everyone has played. The players who have just joined us played half an hour and did well. Those who started have played for an hour and we've not picked up any injuries. The only one is Toni [Kroos] from the other day. I don't like to lose and we're a bit annoyed."