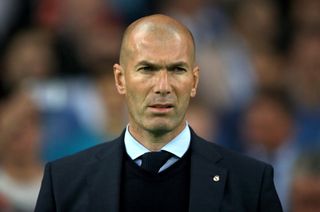 Real Madrid manager Zinedine Zidane has urged his stars to treat their last-eight Copa del Rey clash against Real Sociedad like a final.

Madrid, who are three points clear of Barcelona at the summit of La Liga, turn their attentions to progressing to the semi-final of the revamped cup tournament on Thursday.

Zidane’s side will be favourites to reach the last four after extending their unbeaten run to 21 matches following a 1-0 victory against Atletico Madrid last weekend.

Sociedad meanwhile head into Thursday’s clash at the Bernabeu with three defeats from their last four outings.

But Zidane said: “It’s a final, not a quarter-final. We have to be focused, concentrated and involved in the match from the start.

“It’s a single-leg game and they’re not going to give anything away. We’re up against a great team that plays very good football and is going to come and do things right.

“We are good and happy, but this is a long season. We haven’t won anything, and we have to continue in the same way.

“You can be happy when you have won something. I’m only working on this match, which is the next one and it’s coming now.”

Zidane could be boosted by the return of Eden Hazard for Real’s quarter-final encounter.

The former Chelsea star has been sidelined for more than two months after sustaining an ankle fracture during his side’s Champions League 2-2 draw against Paris St Germain in November.

“Eden’s had a bad injury and now he’s slowly getting better,” added Zidane. “You’ll see if he’s called up. We’re happy to have him for a long time.

“The team is doing very well physically and it’s all because of the work we’re doing. We play every three days and we always have to show that we’re doing well and that we want more.”

🏆 Ready for the challenge ahead!— Real Sociedad (@RealSociedadEN) February 5, 2020

Martin Odegaard is set to line up for Sociedad against his parent club at the Bernabueu.

The midfielder, who joined Real as a 16-year-old in 2015, has impressed during his loan spell at Sociedad with four goals in 20 league appearances this term.

“I like Odegaard, but I don’t think about the future,” said Zidane of the Norwegian who has made just two first-team appearances for Madrid.

“He’s our player and we’re happy with the way he’s playing for Real Sociedad.

“Tomorrow he will be on the opposite team and will try to do well for Real Sociedad. We must think about our own game and what we are going to do.”