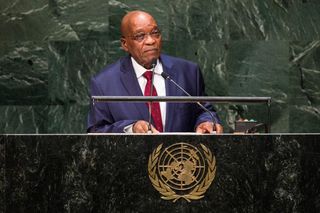 Meyiwa was shot dead on Sunday after intruders reportedly entered his girlfriend's property in Vosloorus on the outskirts of Johannesburg .

The Orlando Pirates goalkeeper's passing has shocked and angered South Africans of all walks of life and president Zuma called for those responsible to be brought to justice.

Shortly after the news broke the president vowed that his law enforcement agencies would "leave no stone unturned" in their efforts to find and arrest the 27-year-old's killers.

"We mourn the death of this young footballer and team leader whose life has been taken away at the prime of his career." read a statement from Zuma.

"The law enforcement authorities must leave no stone unturned in finding his killers and bring them to justice. Words cannot express the nation's shock at this loss.

"We wish to extend, on behalf of government and all the people of South Africa, our words of condolence to his family and relatives, his friends and peers in the football game, his club Orlando Pirates and our national soccer team as well as the football fraternity as a whole.

"May his soul rest in peace."

Meyiwa made seven appearances for his country, captaining them on four occasions.