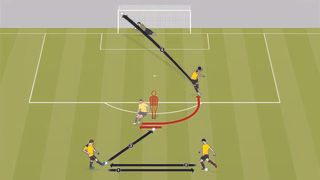 Position a mannequin just outside the penalty box. Have a striker stand in front of it. Position two servers, 10 yards apart, 12 yards away from the mannequin with a supply of balls.

On the coach’s command the two servers exchange passes between one another. Server L then fires the ball to the striker’s right. As the ball is released the striker feigns to go to his right, before receiving the ball on his left which he controls on the turn. It’s important he opens his body out to receive the pass on his back foot. The aim of his first touch is to guide the ball past the mannequin and towards goal to set up a shot. His second touch must be a strike at goal. If the pass comes from server R, the striker has to make a dummy run left, before coming back to his right. The striker has to be alert and ready at all times because he doesn’t know when he’s going to receive the pass from a server.

Firstly this works on the understanding between the midfield players and the striker. By practising this drill, players will get to know each other – when they’re going to pass, when they’re going to run and where they’re going to run. It also works on the striker’s movement. Being able to work a yard of space to receive the ball and get off a shot in a tight space is very important. The striker has to be on his toes and aware, otherwise he will be flat-footed when the server plays the ball into his feet. Timing is key: the timing of the pass, the timing of the dummy and the timing of the run. For this to work in a game, all these elements need to come together. And of course this drill works on technique. The striker needs to control the ball quickly, smoothly and shoot accurately. Executed at speed this is a dangerous attacking move.

Zola was talking at the Gaffer Academy, a management crash-course organised by Football Manager. Football Manager 2013 is available in shops and online. For info, seefootballmanager.com