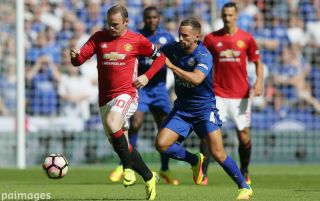 He's played wide, through the middle, as a second striker, off a target man, as the lone man up top: so who better to give us a masterclass on how to play as a striker with a host of different partners than Wayne Rooney?

I have to change my style. Berba likes to drop in and get touches on the ball so I tend to stay as high as I can and leave the space for him to get on the ball. A player like Michael likes to try to get in behind so I have to drop in. Luckily, playing in our team you get a lot of possession and a lot of touches so it’s not too much of a culture shock.

How much did your role change after the departure of Ronaldo?

For two or three seasons I had to play a lot out wide and Ronaldo played through the middle, so that changed straight away. For the team, when Ronaldo was out wide, you knew he would come inside and shoot, do a few tricks. Now with Valencia, you’ve got to be on your toes more in the box because he will move in and cross it more than Ronaldo did.

What about Carlos Tevez?

Carlos was a lovely fella, an honest player who ran for 90 minutes every week and you can’t ask for any more from a team-mate. I think he realised early on that I’m quite an unselfish player, that if he was in a better position I would give him the ball and that if he stayed up I would drop back to cover. We’d work for each other and because we lived round the corner from one another, we’d drive each other to training, drive to the airport together for away games. It was a bit easier to communicate with him on the pitch – his English wasn’t too good and sometimes we’d have these long car journeys in silence!

How much of your game now is still the instinct that 16-year-old kid had at Everton?

At Everton, it was just excitement and pure desire. I just wanted to win every ball, chase every ball and after an hour of the game I was knackered. Now I’ve realised I can’t play like that, you have to save something for when the ball comes to you around the box. I’ve definitely improved through experience and coaching. The more you practice, the better you are in front of goal in a game situation. The more instinctive stuff, when the ball comes and you’ve got to do something quick, that’s brilliant. When that happens, I don’t know exactly what I’m going to do, so the defenders have got no chance of knowing! It just takes over you, the ball comes and you don’t really realise what you’ve done until it’s happened.

You don’t seem to shoot as much from long range anymore? Has that been coached out of you or is there another reason?

I don’t do it as much because I don’t get into those positions anymore. I’ve been playing on the shoulder more of guys like Tevez and Berbatov, trying to get in behind, and you don’t receive the ball so deep. You don’t get the ball, turn and shoot as much. You’re just trying to get in the box. I’m still a passionate player, and that’s important to have in your team – players who can lift the team and lift the crowd as well. Obviously, I love to shoot and shoot and shoot. But the best players are the ones who shoot at the right time, who make the killer pass over shooting when that is the right decision.

What do you still need to work on?

My left foot’s better – I’ve worked on that a lot. My heading’s got better, just by working on my timing on when I meet the ball in the air. Once you’ve got into a routine, it’s muscle memory, your body takes over and it becomes natural.

Let’s talk about some of the roles you have to play as a striker...

You have to support the forwards. I’ve played in the middle and if you don’t get support from out wide it’s really difficult to hold the ball. When you’re defending you need to tuck in and make sure their full-back doesn’t make runs off you. And you have to be more aware of what your own full-back is doing. If he’s running outside you, it’s better to cut in; if he’s going inside, you stay out wide to create more space for him. All the time, you’re making movements off your full-back, the forward, whatever. There’s a lot of decision-making but that’s what all the best players are great at. It happens so quickly, you have split-seconds to make the decisions and you have to make sure you make the right ones.

2. Playing playing off a main striker...

You need to always look at your midfielders, check on their positions. You want to get onto the ball behind their midfielders but in front of the back four. Try to turn them quickly and get players in. Try to get a shot off. Or just keep moving and trying to make space, because it’s so cramped in there. Sometimes it doesn’t look like you’re doing much but physically it’s tough because you’re constantly moving. You’ve got responsibility for their deepest midfielder, their holding player, and you have to get in his face and stop him from getting on the ball. As soon as you lose the ball you’re dropping back into midfield. In that position, I want the ball into my feet rather than in front of me because there’s so little room and it’s hard to get under control.

You have to run the channels, hold the ball up, bring team-mates into play. When the ball goes wide you get into the box, in a good position. The most important thing is holding the ball up, though, because if you can’t do that, it brings pressure on the team. You have to accept you’re not going to get as much of the ball as you would as the man playing off; you won’t get as many chances but you’re doing it for the team. It’s hard when you’re 5ft 10in and you’re up against centre-halves who are 6ft 3in but it’s my second favourite position after playing off another striker. Out wide would be third choice.