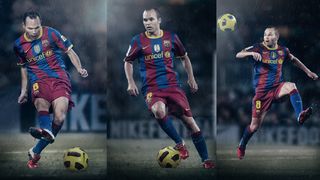 World Champion Andres Iniesta has multiple strings to his bow, and is a constant menace with the ball – be it scheming deep in midfield, picking out the killer passes or arriving in and around the box at the right time to score a crucial goal, as he did on the biggest stage against Holland in last year’s World Cup final.

His sublime range of passing, dribbling ability and extraordinary football brain are at the core of the finest international team on the planet.

Oh, and he’s also a central figure at Barcelona – arguably the most technically gifted side to have ever played the beautiful game.

The Spaniard’s ability to control tempo and create chances for this team-mates set him apart. Numbers don’t lie. The below statistical evidence, provided by Opta, show the unique ability of Iniesta to dominate the game with a fusion of flair and precision.

He showed his game-changing ability last summer in South Africa so it’s no surprise that his passing accuracy and assist ratio establish him as one of the world’s best.

The Nou Camp’s creator-in-chief averaged 47.4 accurate passes per game, compared to the average of 26.9 in his club’s league.

Iniesta registered a passing accuracy rate of 89.06% compared to the La Liga average of 82.51%. In this year's Champions League, Iniesta has found a team-mate with a superb 90% of his passes.

Barcelona’s master orchestrator has already created a joint-competition-high 16 goal-scoring chances for team-mates in his country’s European qualifying matches. Here are Iniesta's passing stats in the three action areas on the pitch.

Andres Iniesta wears the new CTR 360 Maestri II, a boot that helps players to receive, control and distribute the ball to Take Control of the game.  On-sale now. Visit www.nikefootball.com