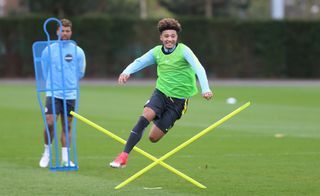 How big is the physical difference between Premier League and academy football?

On a basic physical test – for example a 20-metre sprint – the senior academy and first team players are probably fairly close. However, the distances covered at high speed during training or a match would be greater in the first team. The technical gap also raises training intensity and makes it feel a lot harder and that’s probably the biggest difference our players find. First team players are technically superior; they can play different types of passes and move the ball quicker. The technical difference means they have to work harder physically. From a strength point of view, the first team players have had more years training and should be stronger.

How do you prepare players for the demands of the Premier League?

As soon as players start at the academy at the age of eight, we use a multi-sport system to develop basic physical skills. Once they move into the 12-14 age group, we place a massive emphasis on promoting the quality of athletic movements and developing correct movement patterns to ensure players can reproduce the movements they would do in a game or training. We place importance on the ability of players to control these movements through various positions or under various loads where the movement is challenged. Then as they mature they can be progressively loaded to increase strength and develop power.

How does the training change as a player goes through his growth spurt?

Normally, players will have their biggest growth spurt between the ages of 13 and 15. When they grow rapidly we need to make sure they can still move functionally well so they avoid injury and any mobility issues caused by this growth. We have a formula to predict when this growth will happen, which means we can individualise their programme. We will never make the players lift heavy weights too early but we can individualise certain exercises to challenge players who have gone through their growth spurt earlier than others and are good movers. As they get older, we then focus on big compound, multi-joint training methods to improve strength, speed and power.

Which areas of physical fitness do you prioritise with academy players?

Our long-term approach to youth development is to develop all areas of physical fitness. If you look at football from a physical perspective, they are required to be strong and powerful but also have excellent agility and repeat this numerous times over a 80-90-minute time period. Again, as they become older, a lot of the physical training is tailored towards the demands of their position, we try to make it as individual as we can. For example, a midfielder will cover more distance, but at a lower intensity than a full-back, winger or striker, who will cover shorter distances at a higher intensity and so training must accommodate this.

How often are players subjected to physical testing?

Our senior academy players – under-18s and 23s – are tested every six weeks. Our younger age groups, from under-9s to under-16s, are tested every 12 weeks. We test their speed using a 20-metre sprint test; vertical jumps for single and double leg power. We also measure agility through an arrowhead run, while a YOYO and SDS test designed by staff at the club is used to measure endurance.

Is strength monitored during these physical tests?

We put our under-18 and under-23 sides through upper and lower body strength tests across a variety of movements. To test upper body strength we’ll see how much they can lift for five repetitions using a push and a pull exercise – for example a bench press and maybe a row or pull up. From that we can calculate their one rep max, which tells us how strong they are.

For their lower body, we’ll do the same number of reps for squats and deadlifts and we’ll also do a variety of plyometric jumping exercises and isometric leg press tests. We try to diagnose our players to assess which area requires strengthening in terms of strength or power etc, which we can use to aid programme design.  We also compare strength levels in both single legs so we can identify any imbalances. We need to make sure they can push and pull to a good strength level in both uppers and lower body movements.

How much weight would you expect an academy player to lift in each of these exercises?

We tend to try and look at all the strength tests in relation to body weight. We want all of our players to be able to lift between 1.5 and two times their bodyweight for one repetition. Obviously, that means certain players will have different levels of strength dependant on their bodyweight. For example, if a player weighs 90kg and they squatted 100kg and then you had someone who is 60kg and squatted 100kg, their values would be equal but they’d be lifting very different percentages in relation to their weight. We educate the players on this all the time.

How important is speed and how do you assess that?

It’s an important attribute for the modern player. We test their speed using a 20-metre sprint test and every player is placed in a banding (see below) ranging from poor to excellent. We can see where they’re weak or strong and then adjust their training to address this. We’d never use their physical tests to make an absolute decision on whether a player would get a professional contract but to advise coaches from a physical point of view.

Is it a balancing act increasing a player’s muscle mass while keeping them athletic and agile?

Absolutely. We agree that what you’re looking for in a player is someone who is strong for 90 minutes. If they’re too heavy in their upper body then their movement patterns will suffer, but we also know that a good level of strength can help to reduce the risk of injury and aid performance. Certain players might be required to bulk up and add muscle mass and we will provide the players with those sessions. However we need to make sure we have correct and appropriate nutritional strategies to see an increase in muscle mass and not body fat, which would have a detrimental effect to performance.

How often do players do strength sessions?

For our senior players we aim for three. We do upper body and lower body specific sessions as well as a power session. The power session involves explosive work such as horizontal and vertical jumps and Olympic lifts with variations of those which involve moving resistance at speed. At a younger age we would advise one to two sessions per week, dependent on training and match schedules.

Do you think a player blessed with athletic gifts has an advantage when it comes to making it as a professional?

Absolutely. The game is becoming more physically demanding and players are becoming stronger and quicker. The physical ability of a player is always judged and reviewed prior to them being offered a contract. Unfortunately, a technically gifted but a late developed player might not be able to show off their ability if they’re constantly being thrown off the ball by stronger players. We will sometimes group players based on maturity in bio banding specific sessions so every player has the opportunity to physically compete but also shine technically. This doesn’t happen every day or week but it’s good to add variety to their development.