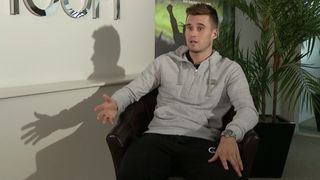 Durant’s godfather Taras Brown made him memorise the quote when he was a young boy dreaming of making it pro. That boy has gone on to become one of the best basketball players in the world.

This is a quote that resonates with England full-back Carl Jenkinson. The young defender sacrificed everything to fulfil a lifelong dream and pull on the shirt of his boyhood team – Arsenal.

But it’s not been a straightforward journey. Jenkinson spent periods out on loan at non-league outfits Welling United and Eastbourne Borough before he joined the Gunners from Charlton Athletic in 2011.

While other promising youngsters were led astray by their new-found celebrity status, Jenkinson stayed dedicated to his goal, and after impressing for Arsenal he won his first England cap against Sweden in 2012. He achieved all this in the space of two years.

Talking exclusively to FourFourTwo Performance, Jenkinson admits he wasn’t the most talented player as a youngster, but his attitude outshone some of the more gifted prima donnas he came across in the Academy.

Watch this video and learn from his experiences on reaching the top.