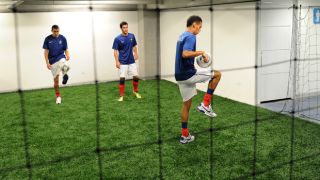 Sir Alex Ferguson could be faced with a team of players quite literally shaking in their boots the next time he dishes out a half-time rollocking.

Researchers from the University of Hull’s Exercise Science Department have discovered that players who do drills at half-time – including stretches while standing on whole-body vibrating platforms – perform better in the next 45 minutes than those who simply sit down and rest.

The Hull researchers split 10 players into three groups during half-time. One group remained seated, one did sprints and stretches, while a third did drills on the vibrating exercisers.

The seated players recorded lower scores for sprints, jumps and strength performance in the second half compared to those who kept their muscle fibres ticking over.

“Being in a seated position isn’t preparing the body for the range of motion it’ll encounter on the pitch,” says elite strength and conditioning coach, Nick Grantham.

“To fire your muscles up for the second half, perform squats and walking lunges for three to five minutes. And instead of ambling back out onto the pitch you should sprint, decelerating as you sharply change direction.”

So stay on the move if you want to catch the oppo cold after the interval – and, in the case of Fergie’s dressing room, you’ll avoid any flying boots as well.