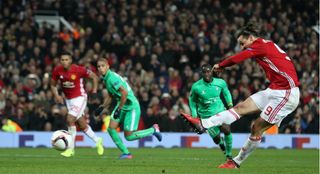 Rejoice, penalty takers – the boffins have finally discovered the art of the perfect spot-kick.

“To maximize the accuracy and velocity of your penalty, players should plan placement ahead of time and use their natural approach speed,” suggests Jay Williams, sports professor at Virginia Tech University and creator of scienceofsoccer.com.

“Don’t try to outguess the goalkeeper with a staggered approach because if he commits late – perhaps less than half a second before the penalty kick – the risk of error greatly increases.

Instead, pay attention to your run-up. A study by the University of Portsmouth has discovered that having an approach angle of between 45 and 60 degrees can alter kick technique – enhancing the way the pelvis rotates and the thigh steers to enable better contact.

And to almost ‘dead cert’ that penalty, aim for the 28 per cent of the goal that’s in the ‘unsaveable zone’.

This, according to theoretical physicist Ken Bray, author of How To Score: Science and The Beautiful Game, is the area of the goal that’s unreachable for the goalkeeper from a standing start.

“Fortune favours those aiming higher, because the gap between the goalie’s reach and the post, close to the ground, is rather narrow,” says Bray, whose studies show that on-target shots placed at the keeper’s shoulder height succeed 100 per cent of the time.

For more football tips see:
How to score penalties
Managing the pressures of a penalty
Matt Le Tissier: How to take penalties