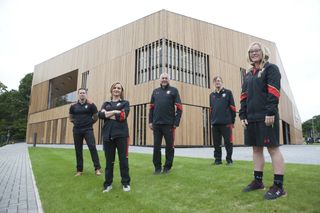 What does Southampton’s life skills programme involve?
We have a pretty rigorous life skills programme for full-time scholars between the age of 16-18. They do workshops from cooking, ironing, washing, sewing. At 18 they move out of a host family environment. If they’re lucky enough to get a professional contract we encourage them to move into an apartment, learn how to wash their clothes, use a washing machine, cook for themselves, look after themselves. You’d be amazed how many can’t do that.

Why is it important for youngsters to learn life skills?
Part of our duty is that by the time they move out of their host family, they’re equipped to look after themselves. They have self-discipline. They’ll also do courses on financial management, alcohol and drug addiction, there’s a whole range of topics over a two to three-year period. It doesn’t stop at under-21 age either. There are also car maintenance courses, which are available to players of any age.

Does this education end at 18?
We encourage boys to keep studying beyond the age of 18, but up to Under-23s lads will participate in life skills. They did cooking and cake baking last year. They had a competition. They continue that programme and we have things like the Uefa B qualification, which we’re happy to support those boys on if they’re interested in taking it. Financially we’ll support them on that. Some of them have shown an interest in a strength and conditioning qualification. We also have a coaching degree in football, which we’re working with a university in Colchester on. We have our first candidate who will be part of that course this year. It’s something that players in under-23s might want to consider. They have options. Toby makes them aware of them.

Do senior players help youngsters adapt to adulthood?
One thing we do at the moment as part of the life skills programme is invite someone like James Ward Prowse to speak to the other age groups. He’s been very proactive in meeting the younger players and telling them all about his story, how he came through the academy and studied here.  Moving forward we’d like to introduce a mentoring programme so every age group has a first team player to speak to two or three times a year, will watch them play on a Sunday and act as a mentor for an age group. We also want a young captain’s leadership programme. We have one or two former players on the staff and we want to develop captains from very age group to learn leadership roles and responsibilities that go with that.