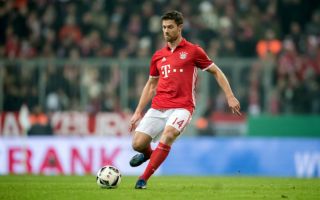 Which of the game’s great passers did you like to watch as a youngster?
I think that Pep Guardiola and Lothar Matthaus were two of the great passers of their generation and I watched them a lot. Paul Scholes was a wonderful player and someone I really respected, and in the modern game Toni Kroos is one of the best passers in the world.

When did you realise passing had become your area of expertise?
As soon as I started playing passing was something that just came very naturally to me. My game wasn’t about dribbling or getting the ball and scoring many goals, it was about being in the middle of the pitch. It was about spreading the ball from one side of the pitch to the other, short passes and long passes. That was my game.

Do you think a sweetly-struck pass is as satisfying as scoring a goal?
It feels great. As soon as I hit the ball, I know if it’s going to be a good ball or a bad one. I’ve got to know that feeling so well on my foot that within the first millisecond I know if I’ve hit it right. When the ball travels at the right speed, height and arrives at the right moment to help a team-mate, I love it.

How did you go about honing your passing ability over your career?
The quality of my passing when I was 20 and the way I pass it now at 35 is exactly the same. However, the difference is my understanding of the game. I’m more mature now and know how to use the ball better in different situations. But I don’t think the passing itself changes that much.

Did you have change your passing style for different team-mates?
Yes. It’s crucial for me to know to who I am passing to. Some players want the ball to feet, others want it in space. One player may want the ball on his right foot, whereas another prefers it on his left foot. These small details can all make a huge difference – you need to give your team-mate an advantage. This is something that has come to me naturally because I have been in the game for such a long time.

How did you manage find space on the pitch to hit those passes?
It’s about trying to anticipate what is going to happen and what you have to do. This will help to give you more time on the ball. If you only start to think about what you’re going to do when the ball arrives at your feet it’s too late. You need to know your space. If you understand this, you don’t have to run as much because you run smarter.

Did you ever look at other sports to improve your striking of the ball?
Yes, I like watching and playing other sports where there is a ball. It doesn’t matter if the ball is smaller or bigger than a football, I can relate to it. The co-ordination and striking skills transfer to football as well. I like playing tennis and basketball and occasionally golf, too. I’m not great at it but I’d like to learn and get better. All of those sports require that feel for the ball when you connect with it.

Did you prefer to play in a team that played a short or direct passing game?
It depended on who I was playing for. I can remember one week I was playing for Real Madrid and in front of me I had Cristiano Ronaldo, Gareth Bale, Angel Di Maria and Karim Benzema. They love the ball being played into space so they can run on to it because they have those qualities. Three days later I was training with Andres Iniesta, Xavi and David Silva for Spain, and that was more about combinations, small passes, and creating 3 v 2 situations to gain an advantage. It wasn’t about space and counter-attack. You need to know your team-mates - that changes everything.

You must have hit tens of thousands of passes during your career – are there any that are your favourites?
I have hit a few good ones over the years so it’s quite tough to pick just one or two! What I would say is that, for me, passing is as good as scoring a goal. It was never my job to put the ball in the back of the net, it was about giving the ball to the players who can do that and it is something that I have always loved to do.

How to improve your passing
Xavi: Master the pass
Paul Scholes: Passing, playmakers and scoring goals
Under Herrera: Pick the right pass
Pass and move combinations