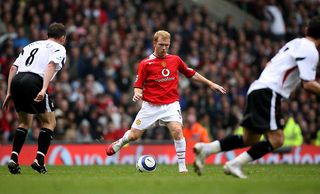 How’s it going Paul? You’re one of the best passers of a ball we’ve ever seen – what was your secret?

Passing was something that came very naturally to me. Until the age of 18 I was a striker, but Eric Harrison [former Manchester United youth team coach] always thought I’d be a central midfielder. He saw something in me passing wise and felt I could be a creative player. I was lucky at United because Alex Ferguson would constantly tell me to play the ball forwards. My first thought when I had time on the ball was always to look for my two wide players and two strikers. The last resort was a sideways or backwards pass.

Did you adjust your passing style for different types of strikers?

Absolutely. I knew Andy Cole would always be on the shoulder of the last man. I didn’t even have to say anything. It would just be a bit of eye contact and then I’d play a through ball or hit a pass over the top. Ruud van Nistelrooy was very similar to Cole in that sense, I could dink it over the top and he’d be away. But then you have players like Teddy Sheringham and Dwight Yorke, No 10s really, they were the players who could play one-twos and little passes round the corner. I’d link up with them and then look for the second centre forward.

How important is courage if you want to dictate play?

It’s huge. The big reason I retired for the first time in 2011 was because I felt I’d lost a lot of my bottle. If you don’t have bottle, you won’t play for Manchester United. You have to have the balls to play and get on the ball. I was playing safe passes and keeping everything nice and easy. I didn’t think I was benefitting the team. I wasn’t doing the things I did earlier in my career. I’d stopped taking risks. Players like Toni Kroos, Luka Modric and Andrea Pirlo have the bottle to get on the ball and control the tempo of a game from start to finish.

Related story: Tim Cahill: How to score from midfield

You ended your career as a holding midfielder – how did you adapt to this position?

I don’t normally like that term because I think as a midfielder you should be able to do everything. But positioning is really important in that role. Rio Ferdinand didn’t like me dropping too deep to pick up the ball. He’d say ‘go away, get out of my space’. Communication with the two centre-backs is crucial – they’re the ones who are pulling you about and telling you where they want you. If they do that, they make everything easy for you.

You also played as a No 10 for a season – what’s the difference between this role and playing in midfield?

When you’re further forward, you have to be able to receive the ball in different positions and have the awareness to play with your back to goal. I was lucky that I played with Ruud van Nistelrooy; he was a great centre forward and I loved playing with him. He was great at link-up play. I was never fast – over five yards I was ok – but when I was younger I had that sharpness to play that role. As I got older I didn’t feel as comfortable playing that position. I found it hard if I was in a one-on-one position with a defender because I wasn’t a great dribbler. I preferred to play a one-two and beat a man that way.

Related story: Dimitri Payet: Speed is key for a No 10

You weren’t blessed with pace, but rarely got caught in possession – why do you think this was?

I think it was my awareness. Eric Harrison would hammer that home. Even if the ball was 50 yards away, he told me to have a glance over my shoulder. He said a central midfield player should always know where he is on a football pitch and have a picture in his mind of where everyone else is. If you do this you know where your next pass is before you even get the ball. When I picked the ball up on the left wing, I knew David Beckham was wide right and without looking I could turn and hit the ball there. I was never a great runner or athlete but my brain was sharp.

A lot of your goals were powerful finishes rather than placement - why was this?

A lot of my finishing came down to instinct, When I had time to think about a shot I don’t think I was a very good finisher. I’d always go for power. Whether that was a header or a shot from the edge of the box – I’d put my foot through it and hope it went in the right direction. Sometimes there would be a bit of guile behind it but I’d rarely go for a side foot finish, it wasn’t something I was very good at.

How to improve your passing