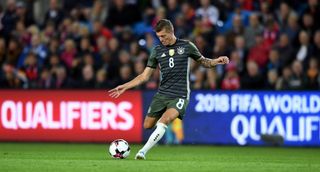 A football team without a passer is like an orchestrator without a conductor. Paul Scholes was the man who made Manchester United tick for years, while Xavi was at the heart of Barcelona’s tiki-taka philosophy. We’ve spoken to both men and a host of other top midfielders about the art of passing – check them out below.

It’s not easy trying to fizz passes around on park pitches in the middle of winter, but with the right drills and hours of practice, anything is possible. Have a browse through our selection of routines and your team will soon be knocking it round like a Sunday League Spain.

2. Running and passing at speed

4. How to stretch the opposition

5. Running and passing at speed

You don’t have to hit Hollywood passes like David Beckham to make an impact on a game. Keep it short and sharp and you’ll soon draw the opposition out of position. Luckily for you, we’ve got some drills from top coaches to help you do exactly that. Enjoy.

4. How to play the passing game

So, you and your team-mates have put together a 25-pass move and now you’re on the edge of the box with the goal in sight. Play an inch-perfect final ball and you could find the back of the net - overhit it and the opposition could hit you on the break. To make sure you do the former, we've asked some top coaches and pros how to hit a measured through ball..