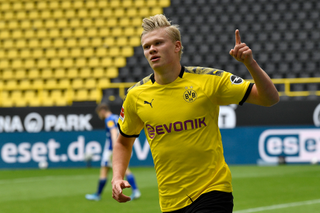 Erling Haaland seems like an unusual person. Currently, that’s the source of consternation in the press, with it being supposed by some that he’s not being respectful enough during interviews.

WHAT'S ON Bundesliga live stream: How to watch Bayern Munich, Borussia Dortmund and the Berlin derby this weekend

It’s possible to see both sides of that coin. Perhaps he would come across slightly better if he were less monosyllabic and if he just played along as he’s supposed to.

Yes, I had a good game. Yes, I’m delighted. Yes, it’s a dream come true to be standing here, answering these soft-ball questions.

Then again, it’s not hard to understand why players disengage or why they might sometimes want journalists to work a bit harder.

Everyone talking about the Haaland interview. Here's the full version. It's more than the 11 words at the end that has gone viral. He actually gives pretty normal answers. pic.twitter.com/8VYCzEn5EtMay 18, 2020

Who knows whether he’s actually being provocative? Maybe he’s just a more original character than most and, as a result, more prone to awkward moments which play badly on television.

But isn’t that part of his appeal?

Shortly before football shut down, Haaland was unwittingly involved in another controversy, when, following victory over Dortmund in the Champions League, Neymar demanded that his Paris Saint-Germain teammates pose on the Parc des Princes pitch, mocking Haaland’s “Zen” goal-celebration from the first-leg.

All of PSG are now doing Erling Håland's celebration in front of no fans.The 19-year old baller has got them all rattled. You love to see it. pic.twitter.com/MoJbzMdK3AMarch 11, 2020

It was painfully childish. Neymar, who is really more Instagram filter than man, was already associated with brattish behaviour, but that was unusual even for him. It was a very fine goal that Haaland had been celebrating. It had been scored in his first Champions League knockout game. And he is still just 19 years old.

Maybe that was one to let go, then – an instance in which an experienced player, already very well rewarded and decorated by the game, might have been more statesmanlike.

But because Neymar wasn’t able to do that, because he needed to have the final word and because, in itself, that’s just so typical of modern football, it served to highlight what an unusual character Haaland actually is.

In every way, really. He looks disproportionate, with arms and legs slightly too big for his body. His big, friendly face and choirboy haircut also doesn’t fit the identity of one of European football’s most feared predators. He’s not built to play his position in the way that Cristiano Ronaldo or Lionel Messi are, nor does he have the technical shimmer of someone like – yes – a Neymar.

Also, he’s not very cool. Talented? Absolutely. Unbelievably successful? Without question. But not ‘cool’ in the fashionable, billboard way. He wouldn’t be sitting with the popular kids in the cafeteria, nor would he be dating a cheerleader. He’s not stylish. He’s not that type.

There’s a story from earlier in the season which sums him up. The night before one of RB Salzburg’s group games in October, he filmed himself driving around the city with the Champions League anthem, falsettos and all, blaring from his car stereo. And then he posted the footage on Instagram.

It was actually rather charming in a ‘kid before Christmas’ way. The point to make, though, is that most players wouldn’t be caught dead doing something like that. Excitement, enthusiasm; these emotions are not part of footballers’ repertoire. In fact, they’re anathema to that contrived indifference with which nearly every other teenager on the planet tries to act.

Millennial chic. Whatever it is, however it’s termed, Haaland doesn’t have it.

Fast forward to last Saturday and his first goal since the Bundesliga’s resumption. There it was again, in that curious, social-distanced goal-celebration and his awkward dancing. His otherness. It’s a very strange look for a superstar. It’s also unusual to see someone who is so obviously headed for global fame carry themselves with such a lack of inhibition.

Erling Haaland isn’t quite a character from the set of Revenge of the Nerds, but that’s the kind of territory he inhabits. He’s Anthony Michael Hall in The Breakfast Club, not Judd Nelson. He’s full of quirks, idiosyncrasies and contradictions, manifesting in how he runs, how he plays, and how he holds himself.

The effect is refreshing. People are drawn to his ability and his goals, of course, but also to this sense that he isn’t just another wunderkind from the conveyor belt, rolling out of the factory with all the brand logos stencilled on. His personality is his and his alone, rather than one taught in an academy.

So, if a few surly-sounding interviews are the price to pay for that, then so be it. He is what is, at a time when the sport could probably do with more difference.

INTERVIEW How do you deal with being the most sought-after teenager in the world? Erling Haaland just scores goals