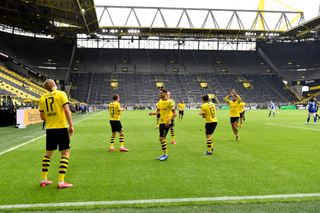 Is it football? That’s up to the individual fan to decide.

The Bundesliga returned over the weekend to a mixed reception. Some decried football’s decision to come back and either turned their backs or watched on in open-mouthed horror. Others, who had been starved of the game for these past few months, just burst into tears of relief as the first kick-offs were taken.

In time, those positions might not soften, but the sense of oddity surely will. The thud of passes, the tinny goal-nets and the Sunday morning aesthetic will become a new normal. These are subjective times, but this form of the game is likely to be semi-permanent and the choice it presents is unfortunately rather stark: either get used to it, or don’t watch.

GUIDE What Bundesliga games are on today?

From a technical perspective, the Bundesliga still presented a flattering face over the weekend. One of the major concerns over its resumption, other than the obvious, was over the calibre of football. Instead of the brand that the league has built – speed, precisions, excitement - perhaps we’d be treated to Bundesliga-lite. Something more akin to the International Champions Cup, or the airy days of pre-season.

Thankfully not. There were certainly a few players who were rustier than others – Ademola Lookman will want to forget his afternoon against Freiburg and Schalke goalkeeper Markus Schubert will also have better days – but they were outliers, exceptions to an otherwise encouraging rule.

It was really interesting. We don’t know that much about the training preparations for these games, other than that social distancing regulations have been in effect, competitive sessions will have been at a minimum, and that friendly games against other clubs – obviously a staple of any pre-season schedule – haven’t been possible.

That’s the right context, too. Football has been on pause since the middle of March and the two-month break equates, roughly, to a normal summer recess. In returning, though, the game has been denied the privileges it usually depends on. No long conditioning programs, no warm-weather training, and – crucially – not nearly as much time with which to build or reconstruct the tenets of team football.

Consider, for instance, Borussia Dortmund’s first goal, scored by Erling Haaland. Or Borussia Monchengladbach’s second, tapped home by Marcus Thuram. At both their source and end points, those were moves which depended on perfect execution and slick timing and, by definition, should probably have been prohibited by the nature of the situation.

OH HOW WE'VE MISSED THIS GAME 😍Erling Braut Håland opens the scoring (of course he does) in fine style!#BundesligaIsBack pic.twitter.com/Th44Yp5rhJMay 16, 2020

To a lesser extent, the two headers Greuther Furth and Hamburg traded on Sunday in the first half of their Bundesliga2 game were further examples. They were instances, perhaps, where the expectation might have been for over or under-hit crosses or mis-timed runs. Instead: great delivery, sharp movement, and two really excellent finishes.

It’s worth contemplating that fluency in finer detail and appreciating what it implies. For the duration of lockdown, it would have been extremely difficult for clubs to regulate player conditioning. Further to which, while Bundesliga 1 and 2 clubs all returned to training on April 8 and had over a month of preparation, there’s an acknowledged difference between what can be gained from the training pitch and what’s needed on matchday. And that’s under the best of circumstances, which these certainly weren’t.

Because football is so fluid, it can be easy to overlook how dependent on sequences it often is. Earlier in the season, I spent time with Mark Molesley, the Weymouth head coach, and was allowed to attend a training session. Without breaking confidences, it was interesting for an outsider to watch the extent to which those kind of mechanics – for all intents and purposes, set-plays in open play – were worked on, and also to appreciate how difficult they must be to make work in the unpredictable climate of an actual match.

Which is why after such a long lay-off the expectation over the weekend should have been for something inferior. Or a bit more muddled. With more passes checking the stride of runners, for instance, and fewer passages of play that could help everyone to forget just how strange this all is.

Or forget for now, at least. As Jonathan Wilson observed for Sports Illustrated on Saturday, it will be some time before we know whether this football is safe and whether it’s prudent to continue in this format. He’s right; only time will tell.

But this was a victory for coaching and a positive comment on how well players have been able to adjust and assimilate. It was subtle testament to both the sport’s advancement and its technical cohesion, crediting the work of those stuck within its quarantined, sterile centre.