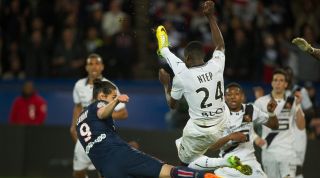 Rennes forward Paul-Georges Ntep – reportedly a transfer target for Liverpool – has developed into one of Ligue 1’s most exciting players.

The French left winger initially caught the eye with a series of stunning performances at Auxerre in Ligue 2 to earn a move to Rennes in January 2014. But over the last 18 months his combination of explosive pace, remarkable one-on-one dribbling skills and ability to both score and create goals have made him one of the most sought-after players in France.

“They had doubts about me”

Born in Cameroon, Ntep moved to France as a youngster. “My parents wanted me and my sister to have a better life and enjoy a better level of education, so they sent us to live with my aunt in the Paris suburbs,” says the 22-year-old, speaking exclusively to FourFourTwo.

“It was difficult because we only knew my aunt by name. We went from living as this big family all together to living with her and having to settle into a new life in a new country. It was tough, but little by little we got used to it.”

As a boy, Ntep played for a number of amateur clubs but it took a long time for professional outfits to recognise his potential. “Lille, Toulouse, PSG, Troyes – from the age of 10 I had trials all over the place but I never got taken on. It was frustrating. There was a lot of travelling but never the end result you’re looking for.

"The scouts and coaching staff at the clubs where I had trials thought I had some good qualities, but they obviously had a few doubts about me as well. When you see lads you know signing for professional clubs and you’re not making it, it’s disappointing. I thought about giving up football altogether and focusing on my studies.”

But he eventually made the breakthrough at Auxerre. “I had a three- or four-day trial there when I was 16. It went really well and I signed for the club.

"I already knew Yaya Sanogo [then at Auxerre] and a couple of other players. Tactically, and in a few other areas, I was behind them because I hadn’t been through the academy system. But eventually I settled and things progressed quickly.”

Ntep played for Auxerre’s under-18s before moving up to the reserves. In 2010/11 he was promoted to the first-team squad and made his professional debut as an 18-year-old in a 4-0 League Cup win over Bastia in October 2010. But he had to wait almost another two years for his league debut, on the opening day of the 2012/13 Ligue 2 season following Auxerre’s relegation from the top flight.

“I was able handle the level of football in Ligue 2 fairly easily because we’d been a Ligue 1 team before that,” Ntep admits. “I hadn’t played in Ligue 1 but I’d trained with the first team all the time. So when we dropped down a level, adapting was no problem.”

In 2012/13, Ntep emerged as one of the most promising young players in France’s second tier. As such, his stellar start to the 2013/14 campaign meant he was linked with a number of bigger clubs in France and abroad before the August window closed. His astonishing individual performance against Lens (below) became an internet hit. It became apparent he was simply too good for Ligue 2.

In January 2014 the inevitable move came when he joined Rennes for €6m – but not before turning down offers from abroad. “Before signing for Rennes I had the chance to join QPR,” the Frenchman admits. “I visited the club and listened to the coach and president’s plans.

"It was obvious they wanted to build a team to do well in the Premier League. But Rennes made me a very good offer as well. In the end I decided I should take my time and try playing at a higher level in France before moving abroad.”

At Rennes, Ntep has shown his full repertoire, proving himself as one of the fastest and most dangerous wingers in the division. He can take on and beat people, has good crossing ability with both feet and boasts tremendous stats: in 43 Ligue 1 appearances (34 starts plus nine sub apps) he’s scored 14 goals at a rate of one every 226 minutes, contributing seven assists too.

He’s a natural performer and wind-up merchant, too. The best exampple of that was when he got down on his hands and knees to head the ball across the line in a league game against Reims in May last year.

“I love one-on-one situations,” says Ntep. “There’s no question I love going head-to-head against an opponent. I’ve won a lot of the duels I’ve had this season. My favourite position is left wing. I feel more comfortable coming inside onto my stronger right foot from that wing because I know I’ve got a big shot.

"I’ve worked on my crossing on my left foot and that’s improved a lot. I’ve been playing on the left wing for a long time now so it’s something I’ve added to my game. I can play on the right, but in terms of dribbling and protecting the ball, it’s not the same for me.”

Ntep has represented France at U18, U19, U20 and U21 level. The next step would be a call-up to the full national team – and Franck Ribery’s international retirement last year means there is potentially a place on the left wing in France’s Euro 2016 squad.

“Of course I look ahead to that tournament,” Ntep admits. “It would be a dream come true to play in it. But there are other players in my position fighting to get into the team. Performances at club level will dictate whether or not you make it into that squad.” And will those performances be for Rennes, Liverpool or someone else? The young Frenchman remains coy. “I’ve always enjoyed English football. The fans, the players, the intensity of the games – I love all that. But I have to keep producing top-class performances for Rennes. Then let’s see what happens…”

More interviews like this one every week at FFT.com