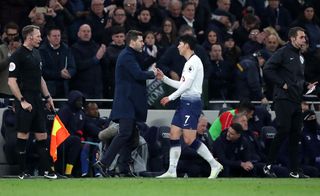 The top 1,000 Fantasy Premier League managers are the cream of the crop, so what do they do that the rest of us should copy?

When it comes to player selection (figures taken at the gameweek 35 deadline), the numbers throw up some interesting differences between the best and the rest.

There is a lot to digest there, including some numbers which may surprise you.

Raul Jimenez is backed by nearly everybody

That’s a strong overall selection, but it’s clear that the top 1,000 have seen something special in him.

The forward costs just £6.9million at present, but for those who backed him from the start that figure was an astonishing £5.5m – and with the numbers he achieves, he’s the perfect cheap striker.

Jimenez has scored 12 goals and registered 10 FPL assists and has featured in every Premier League game Wolves have played this season.

He scores in big games too, with goals against Chelsea and Tottenham across 2018-19, racking up 30 bonus points in the process. That’s why almost every top manager has him in their squad.

Son is the player we’re all missing out on

The player with the largest disparity in ownership when comparing the top 1,000 and overall ownership is Son Heung-min, who was picked by 84.5% of the best, but just 21.9% of all managers.

The Tottenham forward has been in fine form in Europe, netting three goals in Spurs’ quarter-final victory over Manchester City, but he hasn’t set the Premier League alight in terms of goals and assists recently.

Perhaps that’s why so few have opted for the South Korean overall – but with fixtures against West Ham, Bournemouth and Everton to come, the top 1,000 may be banking on Son bringing his cup form into the league.

If he adds to his 12 goals and eight FPL assists, you can expect that gap between the top 1,000 and the rest to narrow.

The top 1,000 aren’t afraid to take risks on a bargain in defence

Brighton defender Shane Duffy and goalkeeper Mat Ryan are both owned by a small percentage of FPL managers, but were backed by more than 50% of the top 1,000.

Brighton players have enjoyed back-to-back double gameweeks, which may explain Duffy and Ryan’s selection figures, but the Seagulls have kept just one clean sheet in seven and are shipping goals in the middle of a relegation battle.

Furthermore, they still have to play Arsenal and Manchester City.

Elsewhere little-known gem Yan Valery of Southampton has proved popular with the top managers, owned by 43.6% of them compared to 3.3% overall.

The £4.1m defender doesn’t have lots of points, but would have caught the attention of plenty when he earned 26 points in four gameweeks not long ago, including goals against Manchester United and Spurs.

Could one of these players help move you closer to the top 1,000?