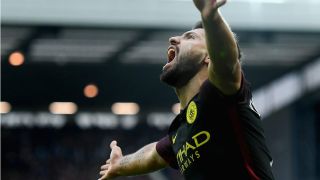 Pep Guardiola believes Sergio Aguero can count himself as an equal to Barcelona stars Lionel Messi and Luis Suarez when it comes to penalty box prowess and urged Manchester City's top scorer to have greater belief in his ability.

Aguero fired a clinical brace as City stormed back to winning ways with a 4-0 triumph at West Brom on Saturday, moving his tally for the season on to 13 in all competitions.

The 28-year-old failed to find the net as the Premier League leaders went six matches without a win ahead of the trip to The Hawthorns, with Guardiola only starting him in three of those contests – most notably leaving him on the bench as 10-man City were beaten 4-0 at Barcelona.

Messi and company are in Manchester for the return Champions League Group C clash on Tuesday and Guardiola has pledged to start Aguero this time around.

Asked whether the former Atletico Madrid man measured up to Barcelona's supreme forwards, Guardiola told reporters: "In the box he is at that level – Aguero has to convince.

"He is one of the nicest players I ever trained in my career. It is a pleasure for me to work with nice people and Sergio is one of the best ones by far, but to convince him he has to believe how good he is and how we need him.

"He has to try. It is not about how many he scores because we are happy with the scoring. If he doesn't score it is not because I am not happy with him, with his behaviour or body language. When he is good everything can happen in our team."

Aguero also played a part to help Ilkay Gundogan add a double of his own to complete West Brom's misery on Saturday and Guardiola headed on to the field to congratulate his match-winner at full-time.

"I said to him, 'thank you'," the former Barca and Bayern Munich boss explained.

"We need him. Without him we cannot achieve our target, it is impossible."