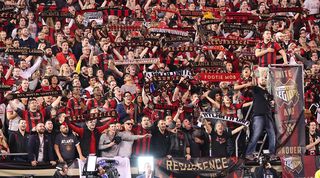 Missed it? Here's Neymar's delightful chip for Barcelona on Saturday

Video: This Osasuna defender has managed one of football's great own goals

After Atlanta lost their first-ever Major League Soccer match 2-1 to the New York Red Bulls in front of over 55,000 fans on Sunday, Argentine midfielder Yamil Asad – who scored the club’s first goal – had to hammer in a golden spike after being named man of the match.

There's reasoning behind the oddity: Atlanta is well known for its railways, and traditionally a golden spike is hammered into the ground to finish off a track.

This season, players and fans will sign the spike before kick-off, with supporters then marching it to the stadium.

MLS is no stranger to unusual post-match rituals. For Portland Timbers victories, each player celebrates by holding up a piece of log (mascot Joey Lumberjack traditionally chainsaws off a piece each time the Timbers score).

Before Atlanta's opening match, local rapper Yung Joc used a larger hammer and spike in a practice that looks set to continue for the season and beyond.