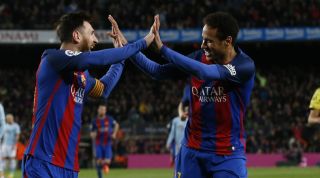 Video: This Osasuna defender has managed one of football's great own goals

The 25-year-old forward scored Barça's second goal in a 5-0 thrashing of Celta Vigo at the Camp Nou, sending Luis Enrique's side to the top of La Liga having played a game more than second-placed Real Madrid.

With little space to work with, Neymar took on a perfectly weighted through-ball from Lionel Messi – who scored two of Barcelona’s goals himself – before lifting the ball over helpless Celta Vigo goalkeeper Sergio Alvarez.

The composed strike was the Brazil international's eighth league goal of the season. Neymar also recorded 11 successful dribbles in the match and received a standing ovation when he was taken off in the 68th minute.