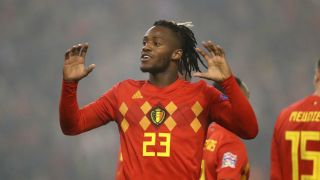 Chelsea striker Michy Batshuayi has joined Crystal Palace on loan for the rest of the season.

Tottenham had been linked with a deadline-day move for the Belgium international after talks over a switch to Monaco earlier in the transfer window collapsed.

However, with Chelsea seemingly reluctant to do business with a top-six rival in the Premier League, Palace have stolen in to boost their aims of pulling away from relegation danger.

West Ham, Everton and Real Betis were also reported to be keen on the 25-year-old's services.

Batshuayi joined Chelsea for £33million from Marseille two and a half years ago and scored the goal that sealed the title for Antonio Conte's Blues in 2016-17.

But he spent the majority of that campaign as a substitute and joined Borussia Dortmund on loan last January, but injuries curtailed an impressive return of seven goals in 10 Bundesliga appearances.

His time at Mestalla yielded a solitary LaLiga goal in 15 outings – 11 from the bench – and persuaded Los Che to curtail a season-long agreement.

Palace manager Roy Hodgson had already bolstered his attacking options this month by re-signing Bakary Sako from West Brom on a short-term deal.