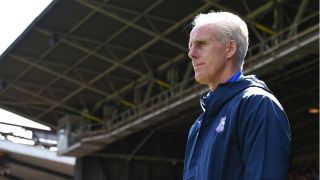 Ipswich Town retained their perfect record in the Championship this season with a dramatic third victory at Millwall on Tuesday, while pre-season favourites Aston Villa remain winless.

Table-topping Cardiff City and Wolves have also won each of their three games so far this term, but Nottingham Forest saw their own winning start come to an end at Barnsley.

Only Burton Albion are keeping Villa off the foot of the table as they were beaten at Middlesbrough.

After wins against Birmingham City and Barnsley, it looked for a long time as though Ipswich would have to settle for a point at Millwall.

In a thrilling game, the hosts were in front through Jed Wallace inside a minute but then headed into the break 3-2 down after Joe Garner equalised and Martyn Waghorn - either side of an Aiden O'Brien goal - hit a brace.

Goals were harder to come by after half-time, but Millwall looked to have earned a point 10 minutes from time when Tom Elliott brought the sides level once again.

But Ipswich were not to be denied and Jordan Spence struck in the 88th minute to record another win.

While Ipswich did things the hard way, Cardiff's routine 2-0 home win over Sheffield United ensured the Bluebirds stay top of the division as Sean Morrison and Nathaniel Mendez-Laing scored either side of half-time.

Wolves, on the other hand, were given a tough test away at relegated Hull City, holding on to win on Humberside despite the hosts scoring a penalty in the 100th minute.

Ruben Neves' first goal in English football was cancelled out by Michael Dawson, but Wolves did enough to win the game through Diogo Jota and Nouha Dicko before David Meyler's late spot-kick.

Forest, however, no longer boast a perfect record after they fell to a 2-1 defeat at Barnsley. Leeds United and Fulham drew 0-0 to both remain unbeaten.

Just like last season, this Championship campaign is not going to plan for Villa as their 2-1 reverse at Reading means they are winless after three games.

Conor Hourihane scored with three minutes left for Steve Bruce's men, but an earlier own goal from Glenn Whelan and a Modou Barrow strike meant it was too little too late.

Villa are only kept off the bottom by Burton, 2-0 losers at Boro courtesy of a Britt Assombalonga brace, but there are a clutch of clubs also waiting on their first victory.

Bristol City's Bobby Reid scored in the 98th minute to deny Brentford three points, while Bolton Wanderers' wait goes on after a goalless draw at Birmingham.

FULL-TIME: The night’s action has come to a close.Here are the results in full. August 15, 2017