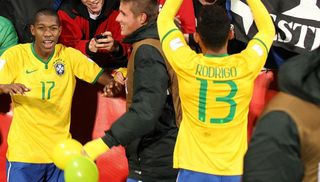 The Chicago Fire announced the acquisition of Brazil Under-20 national team defender Rodrigo Ramos on Wednesday, as the club's revamped back line continues to take shape.

The 20-year-old right back arrives on a one-year loan from Brazilian side Coritiba after debuting for the club in June. He ended 2015 with nine appearances.

Ramos logged two matches at last summer's U-20 World Cup in New Zealand, where Brazil fell to now-Chicago coach Veljko Paunovic and Serbia in the final.

"Rodrigo is a dynamic outside back with lots of range," said Fire general manager Nelson Rodriguez in a news release. "He can cover the flank and gets into the attack consistently well."

The Fire also parted ways with Jeff Larentowicz, Adailton, Joevin Jones and Lovel Palmer — the club's regular starters across the back line in 2015 — after tying for the league's worst defense with 58 goals conceded.