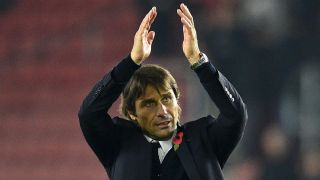 Chelsea's fine form has resulted in a trophy double in the monthly Premier League awards.

Antonio Conte was named manager of the month after guiding Chelsea to four wins in October while Eden Hazard netted the player gong.

The Blues' title challenge gathered pace over that period with Conte's men winning league games at Hull City and Southampton as well as seeing off Leicester City and Manchester United at Stamford Bridge.

November also started well for Chelsea with a 5-0 thrashing of Everton moving them within a point of leaders Liverpool.

Conte told Chelsea's official website: "This is the first time I’ve won the award, it’s a great honour and I want to share it with my players and the club.

"It’s now important we continue and maintain our form. After an international break it’s not easy to restart but we must follow our way and work very hard.

"Our next game is against Middlesbrough on Sunday, we know they are really strong and it will be a tough game, but we have prepared very well."

Belgium international Hazard turned in a series of fine individual performances throughout October and also scored in the wins over Leicester, United and Southampton to continue his encouraging start to the season.

Congratulations Eden Hazard! The star is the Player of the Month for October November 18, 2016