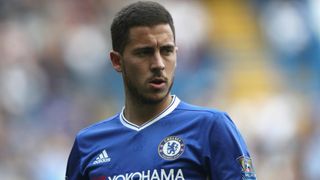 New Chelsea manager Antonio Conte believes he can help the likes of Eden Hazard reach the level of the world's best.

The 2015-16 season was a campaign to forget for Chelsea, who finished 10th in the table as they surrendered their Premier League crown to Leicester City.

Hazard was significantly off the pace compared to the previous title-winning season, when he won numerous individual accolades, though the Belgium star did end the term with four goals in his final five matches.

And Conte, who oversaw a 2-0 defeat to Rapid Vienna in Saturday's opening pre-season friendly, insists Chelsea have men who can become "top, top, top players".

"These players, with work, can still improve a lot," said Conte. "Because now we have players, fantastic players, who have great talent but in this moment the world doesn't think they are the same level as Lionel Messi, Luis Suarez, Neymar, Cristiano Ronaldo or Paul Pogba.

"But in our squad there are players who, with work, can improve a lot and reach this level. I'm sure about this.

"It's important that the players understand they must work to show that 'Now I am a top player, but I want to become top, top, top, top and want to stay there'.

Conte added: "Last season was bad for all the players, it's incredible that Chelsea finished 10th in the table.

"And last season it was incredible, not only for Hazard but for other players also. It's important for us to recover Hazard in the best condition: technique, tactical, physical, overall and with the good mentality.

"But I spoke with him and I'm very happy. I'm pleased to train a fantastic player like him and also the other players.

"It's important for me, I repeat, next season to create the right spirit in the team and with great organisation, a great physical condition we can have a good season."