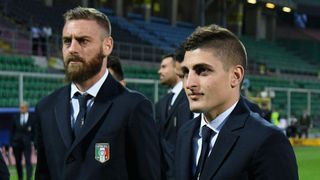 Roma star De Rossi opened the scoring from the penalty spot, with Ciro Immobile making sure of the points in the second half of a 2-0 triumph, which left them level at the top of Group G with Spain.

Having been paired with Verratti in Palermo, De Rossi spoke of his "pleasure" to play alongside the Paris Saint-Germain star and how Italy are progressing under Giampiero Ventura.

"We're already realising there is a great squad forming here and [the young players have] already fused with the veterans," De Rossi told Rai Sport.

"They've got a great sense of responsibility and realise what it means to represent Italy. It's a very positive atmosphere.

"I've always got along well with Marco Verratti. It's easy to play with good team-mates who know when it is the right moment to keep the ball and when to pass it, so we're talking about one of the best. It's a pleasure to play with Verratti."

Verratti, meanwhile, said he is still adapting to Ventura's style of play – the Italy coach having taken over after Euro 2016.

"It was a good overall team performance," he added. "I have a very different style of football to Andrea Pirlo and it is also a different style to the one at Paris Saint-Germain, so soon I'll better understand what the coach wants from me."