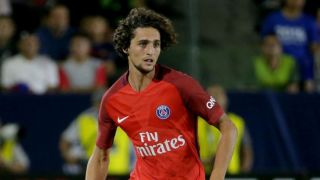 Unai Emery has tipped Adrien Rabiot for a successful career with Paris Saint-Germain and France.

The 21-year-old midfielder played 24 Ligue 1 matches last season but has started all four top-flight games under Emery in 2016-17.

Having been in and out of the team under former boss Laurent Blanc, Rabiot is yet to earn a senior international cap.

However, his new coach believes a bright future at the Parc des Princes and with the national team lies in store.

"I am very happy with Adrien Rabiot. He has a great future at PSG and in the France team," said Emery.

"He exhausts himself physically. He had a very good game in Caen [a 6-0 win last Friday]. I spoke with him because I thought he could be doing even more, even though what he has been doing so far is very good."

Thiago Silva made his return from a hip injury sustained in pre-season in the 1-1 Champions League draw with Arsenal last week.

After being frozen out under Dunga, the centre-half is back in the Brazil squad for October's 2018 World Cup qualifiers against Bolivia and Venezuela having been picked by new boss Tite.

However, Emery insists the main focus for Silva, who has been included in the squad to face Dijon on Tuesday after being an unused substitute against Caen last Friday, is PSG.

"He is feeling well. He's improving physically after his injury and he needs to play several games in a row. Every Brazilian player I know really likes being with the national team and he's preparing," said the coach.

"He was with us during the pre-season, he did not go to the Olympics. But his priority is to play with PSG, then he thinks about the Selecao.

"He's an important player for us. He has the experience we want for the team."