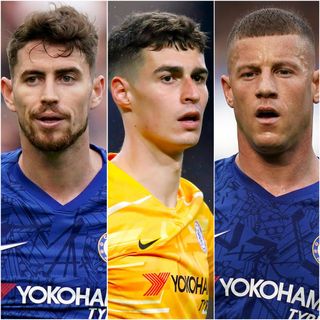 The Chelsea squad could be subject to a shake-up over the summer, with the Sun reporting that Frank Lampard will lead a clear-out at Stamford Bridge which could see KepaArrizabalaga, Jorginho and RossBarkley heading for the exit.

Sticking with Chelsea, and the Daily Mirror reports that Lampard is keen on reinforcing his defence with DayotUpamecano who is currently on the books of RB Leipzig.

Manchester United want to keep AngelGomes into next season and are hopeful he will pen a new deal with the Old Trafford club, reports the Manchester Evening News. Gomes has made six appearances for the first team this season.

KalidouKoulibaly, currently on the books of Napoli and subject to interest from Manchester United, has been linked with a move to Ligue 1 champions Paris St Germain according to the Daily Star.

Aston Villa are weighing up a move for MorganSanson should they remain in the Premier League this season, reports the Birmingham Mail. The Marseille midfielder has represented France at both under-19 and under-21 level.

Loris Karius: The 26-year-old is keen on making his loan move to Besiktas permanent, and is hoping Liverpool will let him leave on a free transfer, reports Fotospor.

Pablo Mari: Arsenal are keen on signing the 26-year-old from Flamengo with the defender impressing during his current loan spell at the Emirates Stadium, says Coluna Do Fla.

Ugurcan Cakir: Sheffield United have suffered a setback in their bid to sign the Turkey goalkeeper after Trabzonspor rejected an £11m bid, reports Turkish Football.