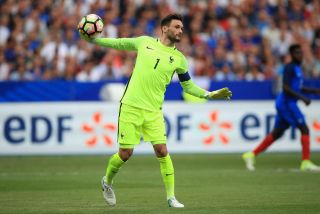 Captain Hugo Lloris has warned France cannot afford to relax as they prepare to tackle Andorra and look to keep themselves ahead in the battle for Euro 2020 qualification.

Didier Deschamps’ men saw off Albania 4-1 at Stade de France on Saturday night, but are in a three-way tie at the top of Group H on 12 points alongside Turkey and Iceland.

With European minnows Andorra having only gone down 1-0 away to Turkey in Istanbul for what was a fifth qualifying defeat, Lloris insists there cannot be any talk of complacency if Les Bleus are going to get the job done.

“We get very motivated by looking at the rankings of our group, it’s very tight and it’s a three-point match, and of course, if you can also win by improving the goal difference, it’s always interesting,” the Tottenham goalkeeper said at a press conference.

“We also have this duty, which we often talk about, to wear this jersey of the national team.

“There is a desire to share emotions and give happiness to our supporters. All these motivations will inspire us for the match tomorrow.”

Andorra were denied what would have been a hard-earned point in Instanbul after Ozan Tufan scored a late winner.

Lloris feels that should offer warning against expecting an easy night in Saint-Denis.

“How Andorra played against Turkey is certainly a reference match for them. They held until the 89th minute and were very close to an achievement,” said Lloris.

“This will certainly give them a little confidence and they will want to reproduce the same performance at the Stade de France.”

Arsenal midfielder Matteo Guendouzi could be in line for a first senior appearance, the 20-year-old having been called up following injury to Paul Pogba.

Coach Deschamps – who offered a public apology after the wrong national anthem was played for opponents Albania before kick-off in Paris – knows whatever side he puts out will have to produce a focused display.

“You think maybe the outcome is already settled, but it is a football match,” Deschamps said.

“We will have to bring the same variety and speed that we did against Albania to create opportunities.

“My players know very well that we have to start again tomorrow and that the three points against Andorra will have the same value as those obtained against Albania.”