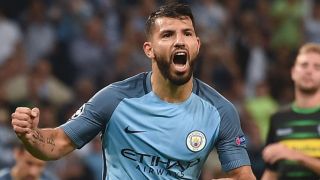 Manchester City boss Pep Guardiola expects Sergio Aguero to sign a new contract with the club and says he would be "so happy" if the deal is confirmed.

The Argentina international is already under contract with City until June 2019, but reports in England suggest he has already put pen to paper on a one-year extension.

Guardiola insists he does not know if a deal has been done, but would be delighted to see Aguero - who already has two hat-tricks to his name this season - commit to fresh terms.

"I don't know if I'm the right person to talk about that - I think he is going to extend the contract but it's not official," said Guardiola.

"I'm not the right person to say it's going to happen. Simon [City's press officer], maybe you know better than me.

City face Bournemouth without the suspended Aguero on Saturday looking to make it five straight wins to kick off the Premier League season, but Guardiola is taking nothing for granted despite his side's fast start.

He continued: "All we can do is work a lot. If the players have learned quickly, it is because of their quality.

"It's only September and we can't forget that. There is a long time to go. Every game we can be better, every game there is a chance to improve. There are many things we can do better and that's how it is.

"Any team can beat you - I feel that. And I'm going to feel that tomorrow [Saturday]. I allow myself to feel satisfied for an hour or two hours after a game but the day after you worry about what is going to happen.

"We start again and what we did in the past is the past - there are no guarantees to play good or win the game. That's why this job is so beautiful.

"I have watched many of their games. They played really, really well against West Ham and against Manchester United - they were in the game right until Juan Mata scored. There are many, many things I like."