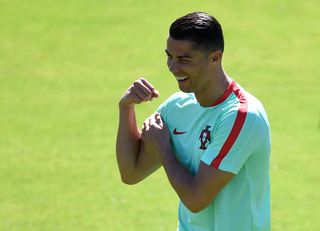 Portugal will attempt to win the Nations League when they host the inaugural finals this summer.

Here, Press Association Sport takes a look at Fernando Santos’ side ahead of their June 5 semi-final clash against surprise package Switzerland.

Portugal won their first ever major trophy just three years ago. Despite star turn Cristiano Ronaldo being forced off early on against hosts France in the Euro 2016 final, Santos’ men dug deep to make history thanks to Eder’s extra-time strike. Their previous best at the European Championship had been the crushing final loss to Greece when tournament host in 2004. They have twice reached the semi-finals of the World Cup, finishing third in 1966 and fourth in 2006. The Portuguese exited in the round of 16 last summer thanks to a 2-1 loss to Uruguay.

Santos’ side sealed their place at the inaugural finals by winning Group A3. Andre Silva’s goal was enough to see off Italy 1-0 in their opening match, before going on to return from Poland with a 3-2 win. A goalless match in Italy followed, before drawing 1-1 against Poland in Guimaraes to condemn their opponents to relegation. All three members of Group A3 had expressed an interest in hosting the finals and topping the pool meant Portugal got that honour – and the chance to right the wrongs of Euro 2004.

Ronaldo did not appear in Portugal’s Nations League group campaign but is likely to captain the European champions after being named in their 23-man squad for the tournament. Four Wolves players have been included in the group, with uncapped forward Diogo Jota joining Rui Patricio, Joao Moutinho and Ruben Neves. Manchester City’s Bernardo Silva will be looking to continue his excellent form, while Joao Felix, Joao Cancelo and Bruno Fernandes will get the chance to show their talent to a wider audience.