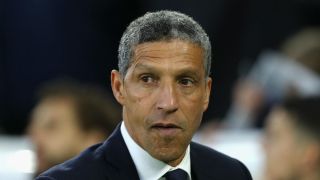 Chris Hughton was "delighted with the character" of his Brighton and Hove Albion team after the Seagulls came from behind to secure a point against Tottenham.

Harry Kane's strike in the 48th minute looked to have put the visitors in the driving seat at the Amex Stadium.

But a Pascal Gross penalty two minutes later squared things up for the hosts, who clung on for a vital result that may help to secure their Premier League future.

Brighton remain 13th in the table but are now eight points clear of the bottom three, bouncing back from Saturday's 3-2 defeat to Crystal Palace.

Hughton told Sky Sports: "It's a step in the right direction. What I was most delighted with was the character of the team to concede the way we did and then react the way we did.

"We showed great quality in the areas when we needed to. Against these big sides you have got to give everything and if you are below your best they can really hurt you.

Chris Hughton highlighted the character shown by his players at the Amex...️ “It’s a step [towards safety] and what I was most delighted with was the character of the team. It was great to see the reaction from the players."Read ️ April 17, 2018

"The supporters have been excellent all season. Our performances here have been good and we have needed them. With any support, if they see reaction from the players they will get behind them."

Gross highlighted that the side still have work to do going forward but stressed the significance of the result in Brighton's season.

"It is a very important point in a bad period," he said.

"We fight together and showed we have good character as a team.

"We know we need some more points and have games remaining. You always have a chance in football so we got a point today and we have to keep going."