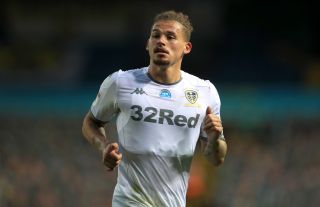 Kalvin Phillips insists he pays no attention to Leeds’ Sky Bet Championship promotion rivals in the race for a top-two finish.

West Brom moved to within a point of Leeds after winning 3-0 at Sheffield Wednesday in midweek, while third-placed Brentford are five points further back.

Leeds will bid to extend their lead at the top at Blackburn on Saturday and Phillips said that was all he was interested in.

“To be honest I didn’t even watch it (West Brom),” Phillips said. “I don’t even know the score. What was the score?

“I try not to look at the other results, I try to just focus on our games and how we’re doing and not focus on anybody else.

Phillips’ approach is understandable after Leeds’ play-off disappointment last season, while there were clear signs of frustration among Marcelo Bielsa’s players during Tuesday night’s 1-1 home draw against Luton.

Leeds were denied the chance of moving six points clear at the top and Phillips said the players had since had a clear-the-air meeting.

“We were speaking about it yesterday as a team,” said Phillips.

“Luton came to not get beat and came to frustrate us and just sat back.

“As a team we find it more comfortable going at a team that’s coming at us, catching them on the counter attack and just having a good battle.

“With Luton it frustrated us a little bit, you kind of saw that towards the end of the game, us players arguing and stuff. It’s not really in our nature to start arguing between ourselves.

“We had a talk (on Wednesday) and said no matter what happens, as long as we’re confident in ourselves and as a team we’ve got to keep on fighting to try and get results.

“We’ve just got to be more accurate, be more consistent with the passes that we’re using to go forward and try not to be wasteful of chances.”

Phillips said both skipper Liam Cooper (glute) and Stuart Dallas (hamstring) had not joined in with the rest of the squad since sustaining injuries against Luton, but neither player had been ruled out of Saturday’s trip to Ewood Park.