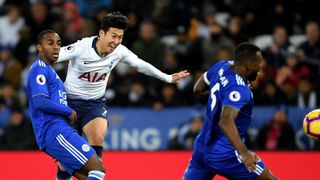 Tottenham tuned up for their crunch Champions League clash against Barcelona with a clinical 2-0 Premier League victory over Leicester City.

Harry Kane and Christian Eriksen were able to rest up on the bench and enjoy a stunning Son Heung-min opener on the stroke of half-time.

Dele Alli headed in his 50th goal for Spurs in all competitions to make the points safe, moving Mauricio Pochettino's side back up to third in the table following Chelsea's 2-0 win over champions Manchester City earlier on Saturday.

Tottenham now face the daunting task of needing to better Inter's result against PSV when they take on Barca, who were in rampant form in a 4-0 derby demolition of Espanyol in LaLiga.

As Kane watched on, Spurs dominated possession with some slick play but lacked a cutting edge during the opening 45 minutes.

Son 's wild and wayward free-kick summed was entirely out of keeping with what he produced in first-half stoppage time.

Shortly after Wes Morgan produced a brilliant last-ditch tackle to deny Alli, the Korea international shifted the ball on to his left foot and, from 25 yards, crashed an unstoppable strike past Kasper Schmeichel.

In an attempt to rouse his side from their creative slumber, Claude Puel brought on Rachid Ghezzal and Marc Albrighton for Vicente Iborra and Kelechi Iheanacho.

But Leicester were dealt a body blow as Nampalys Mendy coughed up possession and Son turned provider, scampering into space on the left flank to cross for Alli to power past Schmeichel's best efforts.

What does it mean? Spurs back on track after derby setback

In a week when Jose Mourinho has bemoaned the rest of England's major clubs having the means to improve at a quicker rate than Manchester United, it is worth remembering Pochettino ended up not spending a penny on his squad during the last transfer window. It has been a season littered with setbacks on and off the pitch, but Tottenham's capacity to bounce back hints at a resilience they have previously lacked. It's two wins from two since last weekend's derby setback against Arsenal and 12 from 16 in the Premier League this season.

Son adds another beauty to the collection

Tottenham's best performances and Son hitting top form seem to be increasingly intertwined. His opening goal was entirely different to the lung-bursting solo run that slayed Chelsea a couple of weeks ago but no less impressive. A supreme cross to Alli crowned a brilliant performance.

Kane watched the opening 56 minutes Iheanacho was on the field and had about as much involvement as his fellow striker. The former Manchester City forward failed provide a spark or an attacking focal point and his thrilling breakthrough as a teenager at this level is starting to feel like a long time ago.

Spurs' date with Champions League destiny at Camp Nou precedes a return to Wembley against Burnley next Saturday, when Leicester travel to Crystal Palace.