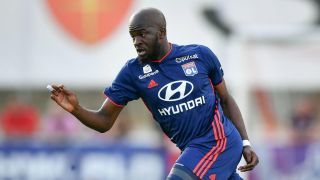 The 21-year-old has enjoyed a fine start to the new season, starting all seven matches in Ligue 1 and helping Lyon to a shock Champions League victory away at Manchester City.

His performance in that match did little to dispel rumours of interest from the Premier League champions, while Tottenham are also believed to have considered an approach during the previous transfer window.

Ndombele extended his contract with Lyon until 2023 earlier this month and his club boss believes the youth international deserves to be called up by Les Bleus.

"He has to go one last step in finishing, the only thing he needs to become a great player," Genesio told a news conference.

"He lacks some concentration in the final third but he has the technical quality to do it. He should score between six and eight goals per season, considering his position.

"Tanguy understands the demands of the highest level and gives himself the means to reach it. He has international quality, but it's not up to me to decide if he will be selected."

Didier Deschamps will soon announce his France squad for games against Iceland and Germany in October, the second of which is a crunch Nations League fixture.

The World Cup winners made just two changes on their return to action last month following their triumph in Russia, with goalkeepers Hugo Lloris and Steve Mandanda both unavailable through injury.