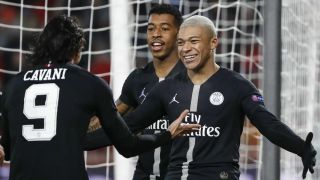 Kylian Mbappe believes Paris Saint-Germain's progress to the last 16 of the Champions League was inspired by some frank discussions within the team.

A 4-1 win over Red Star Belgrade on Tuesday secured PSG's place in the knockout phase as winners of Group C, with Liverpool second following their 1-0 victory over Napoli.

Thomas Tuchel's side appeared to be in some trouble when they won only one of their first four matches in the competition this season, but six points from their final two games was enough to send them through.

Mbappe, who scored PSG's fourth in Belgrade after earlier goals from Edinson Cavani, Neymar and Marquinhos, suggested the squad have benefited from the exchange of a few home truths.

He told RMC Sport: "We're happy. We came to qualify. We responded to that. We'll focus on the league and the domestic cups and resume the Champions League in February.

"I don't think the team's improved; it's more that we had a realisation. We started performing and did what was asked of us. We asked questions of ourselves as individuals and as a team.

"You have to be able to speak frankly to each other. We did that and got our reward."

70 - Paris  have scored 70 goals in all competitions this season, more than any other team from the Top 5 European leagues (Manchester City, 66). Firework. December 11, 2018

Mbappe set up Cavani and Neymar's goals and was assisted by the Brazil star for his own strike, and he was keen to extol the qualities of his attacking team-mates.

"I have the chance to play with two great players. When we play like tonight, it's good for everyone," he said.

"They are players who have nothing to prove to anyone. Cavani is the leading goalscorer in the club's history; Neymar is one of the best in the world.

"We have to go forward and look at what is ahead. We're looking at the last 16 and we'll see what happens in the draw [next Monday]."

Marquinhos, whose bullet header eased some tension among the visiting fans after Marko Gobeljic had got a goal back, praised Tuchel for guiding his players through a tough test.

"The group has grown in maturity, experience... it was a difficult night at 2-1 and the group responded well," said the centre-back. "The coach spoke to us at the right time, showed us things at the right time, especially on the level of our state of mind.

"Ney, Edi, Kylian... they make effort for the team. When we put on his shirt, we have to want to win. With this team, this mentality, we can do very good things."