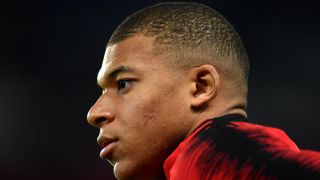 Mbappe has scored 13 times in 12 appearances for club and country this season but appeared frustrated throughout a midweek 2-2 draw with Napoli in the Champions League.

And the France forward has been named among the substitutes for Sunday's Ligue 1 meeting with Marseille, which Edinson Cavani misses due to a thigh injury.

In the absence of Cavani and Mbappe, Tuchel has handed a first Ligue 1 start for PSG to Eric Maxim Choupo-Moting after the forward's move from Stoke City.

With Thiago Silva sitting the game out due to a hamstring injury, 19-year-old Stanley Nsoki is in the PSG side as Tuchel's men aim to extend their perfect opening to the season.

PSG will equal Tottenham's 11 straight wins at the start of the 1960-61 season, a record for the top-five leagues in Europe, if they beat Marseille.