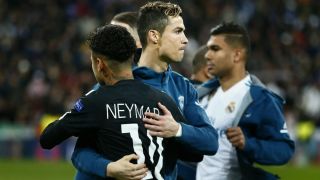 Cristiano Ronaldo, Lionel Messi and Neymar are the only genuine "superstars" in world football, according to Brazil great Pele.

Ronaldo and Messi between them have won every Ballon d'Or since Kaka's triumph in 2007, while Neymar has finished third in two of the last three years, including the most recent edition.

Brazil fans are used to seeing some of the world's best playing for the Selecao, with Pele highlighting the fact they have often had "three or four top players for each position" at a given time.

The 77-year-old does not think that is the case anymore, though he does believe Neymar is one of football's leading trio, praising the Paris Saint-Germain attacker for being able to adapt to a different role with his national team to the one he usually takes up at club level.

"Neymar has changed the way he plays with the national team," Pele told FIFA.com. "He has had to.

"At his club side, he was playing as a left-sided attacker, whereas for Brazil, he plays more centrally, as a more traditional number 10. That's hard, but he's managed to adapt his game.

"If you look around the world, the ones who stand out are Lionel Messi, Cristiano Ronaldo and Neymar. There are no other superstars.

"The important thing is for the national team to be well organised as a group because they no longer have three or four top players for each position.

"The same is true of Germany, whose emphasis is more on the collective. Before, it was individuals who mattered most, but it's changed a lot. It's all very similar these days."

Brazil's chances of World Cup success will surely be pinned on the performances of Neymar, who Pele feels is already "technically" the world's best player.

"He's ready, yes," Pele added. "He might find that the tactical switch from his club to the national team isn't straightforward, but Neymar is Brazil's key player.

"He has to prepare himself for that. And I would go further: for me, technically, he is already the best player in the world. I'm absolutely sure of that."