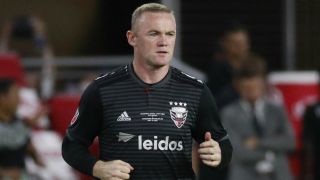 Wayne Rooney was on target as DC United were held to a 3-3 draw by New York Red Bulls in MLS after Bradley Wright-Phillips equalised at the death.

Paul Arriola put DC ahead in the 25th minute with his fifth goal of the season, only for Wright-Phillips to restore parity four minutes before half-time at Audi Field.

DC thought they had the game won when Luciano Acosta teamed up with Yamil Asad three minutes from the end but the hosts were thwarted by Wright-Phillips' last-gasp equaliser.

Unbeaten in four matches, DC are four points adrift of the play-off places in the Eastern Conference, while the Red Bulls missed the chance to leapfrog Supporters' Shield leaders Atlanta United – New York a point off the pace.

In Sunday's only other match, Chicago Fire crushed Orlando City 4-0 in the battle of the MLS strugglers.