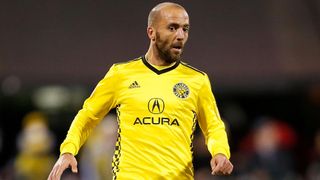 Toronto's MLS title defence started with a surprise loss, while Houston Dynamo opened the season with a resounding win on Saturday.

Goals either side of half-time from Federico Higuain and Gyasi Zardes saw Columbus to their victory.

Higuain volleyed in the opener in the 44th minute, getting on the end of a Milton Valenzuela cross from the left.

Just 52 seconds into the second half and it was 2-0, Zardes finishing clinically after a beautiful through ball from Pedro Santos.

A fast start helped the Dynamo crush Atlanta United 4-0 in their opener at BBVA Compass Stadium.

Andrew Wenger tapped in the opener in the fifth minute before Philippe Senderos headed in a cross midway through the first half.

Mauro Manotas made it 3-0 in the 27th minute and Houston added another late in the half through Darwin Ceren.

Elsewhere, Dallas and Real Salt Lake drew 1-1 and the San Jose Earthquakes held on for a 3-2 victory at home to Minnesota United.

The New England Revolution were reduced to nine men during their 2-0 loss at Philadelphia Union and a 10-man Orlando City drew 1-1 with DC United.