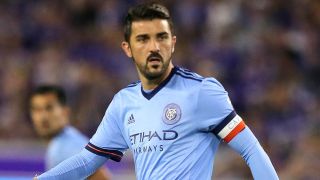 The hosts struck first in the 10th minute, Ismael Tajouri producing a stunning finish from 20 yards.

Villa found the bottom corner to double the lead in the 26th minute as City took control.

In the Western Conference, the Timbers set up a meeting with Sporting Kansas City after a 2-1 win over Dallas.

Diego Valeri opened the scoring for Portland with a fine 25-yard free-kick midway through the first half.

However, their task was made difficult approaching the hour-mark, when Larrys Mabiala was sent off.

But Valeri doubled the Timbers' lead in the 71st minute and they held on despite Matt Hedges' late goal for Dallas.