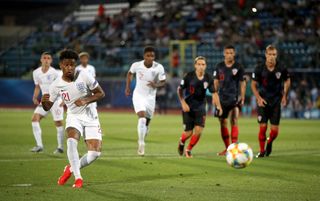 Reiss Nelson has revealed how Raheem Sterling has been inspiring him to make a Premier League breakthrough.

Nelson scored a penalty in Monday’s 3-3 draw with Croatia as the Young Lions bowed out of the tournament having failed to qualify from Group C.

But the teenager has taken advice from Manchester City and England star Sterling to help him improve following a loan spell at Hoffenheim.

“Raheem is a role model to a lot of young lads coming through. He gives me little messages on Instagram, like ‘keep going’,” he said.

“I was training with the England team a couple of times and he is there always giving encouragement.

“It is always good to have people like him in and around the England set-up to give you the pat on the back that you know you are doing well and good things are coming.”

The 19-year-old is now eyeing a first-team role at Arsenal after scoring seven goals for Hoffenheim in the Bundesliga.

“It was difficult leaving (Germany) but Arsenal are my team and I want to go back to Arsenal and play,” said Nelson.

“I have got a bit bigger. I was playing at Arsenal when I was 17, when he (Arsene Wenger) gave me my debut against Southampton, so I was very immature when I was playing.

“Now I have a more mature role about me. I look to play link-up play, one v ones, and I think I am more mature.

“In Germany we had a leaving party, which was nice. A lot of other players were going to different teams. They had a video and gave me a Nelson signed framed shirt as well. It was really good stuff.”

England Under-21s missed out on the semi-finals after losing their opening two games to France and Romania and they conceded nine goals in just three matches.

It was their worst performance at the European Championships since 2013 and Nelson – who is eligible to play in the next Euros in two years – was eager to prove himself in his only appearance in Italy and San Marino against Croatia.

“I was on the bench the first two games and it wasn’t a nice feeling, but you know when you get your chance you have to take it,” he said. “I tried to go out there and prove a point.

“I expressed myself, 100 per cent. I played with no fear. The team helped a lot of the younger players to perform well.

“We had a good bunch of lads here that were probably favourites to do very well for England, but we still have a young generation coming through the ranks who can do very well for the country.

“So we just have to wait and see who gets picked. Hopefully the good core that gets picked go and do well.”