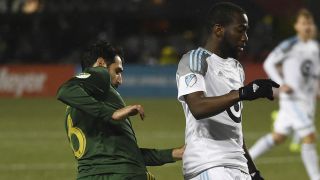 Minnesota United made their MLS debut on Friday but they were no match for Portland Timbers, who opened the 2017 season with a 5-1 demolition.

Joining the competition along with Atlanta United as the league expanded from 20 to 22 teams in the United States, all eyes were on Minnesota with USA head coach Bruce Arena watching from the stands in Portland.

But expansion franchise Minnesota - who were founded in 2010 and competed in the North American Soccer League (NASL) until 2016 - went down to braces from Diego Valeri and Fanendo Adi.

The Timbers, playing in front of a colourful and vocal home crowd at Providence Park, opened the scoring through Lawrence Olum in the 14th minute.

Olum bundled the ball into the net from Valeri's corner and the latter scored a goal of his own two minutes into the second half as the Timbers doubled their lead.

Sebastian Blanco whipped in a perfect delivery and Valeri guided his header into the top corner of the net.

Just like their younger days.That can't be the first time the Blanco  Valeri combo has happened. March 4, 2017

Minnesota did manage to make history away from home, scoring their first MLS goal courtesy of substitute Christian Ramirez with 11 minutes remaining.

Superman pulls one back for , scoring the first MLS goal in club history. March 4, 2017

However, Valeri converted an 82nd-minute penalty after Fanendo Adi was fouled inside the area to restore Portland's two-goal lead.

And Adi completed the rout with two quick-fire goals in stoppage time.