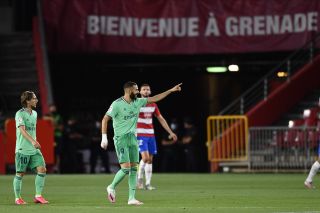 Real Madrid moved to within one win of a record-extending 34th LaLiga title after first-half goals from Ferland Mendy and Karim Benzema sealed a 2-1 win at Granada.

The Spanish giants looked to be in cruise control when Mendy burst into the area and rifled beyond Rui Silva from an acute angle on the left after 10 minutes before Benzema struck just after a quarter of an hour.

Isco’s clever back heel to Luka Modric led to Benzema being found in acres of space on the left and the Frenchman cut on to his right foot and powered a shot into the top corner at the Nuevo Estadio de Los Carmenes.

However, Casemiro was sloppily dispossessed on halfway, allowing Granada to break, with Darwin Machis halving the deficit after nut-megging Thibaut Courtois five minutes after half-time.

The goal breathed fresh life into the hosts, who were denied a leveller by some last-ditch defending as Sergio Ramos cleared off the line to keep out Ramon Azeez after Courtois had saved excellently from Antonio Puertas.

With just two games left in the season, Real are four points ahead of bitter rivals Barcelona and Zinedine Zidane’s side will seal a first top-flight crown in three years if they overcome Villarreal on Thursday.

Villarreal saw their slim hopes of a top-four spot evaporate after losing 2-1 at home to Real Sociedad, who are now level on points with sixth-placed Getafe and just three behind the Yellow Submarine.

Willian Jose’s effort just after the hour mark was followed by Diego Llorente’s goal with 15 minutes left and, although Santi Cazorla pulled one back in the closing stages, it proved a mere consolation.

Alaves ended a run of six successive defeats with a goalless draw against Getafe to move four points clear of the bottom three.

Elsewhere, Inter Milan moved back up to second in Serie A after coming from behind to beat Torino 3-1 thanks to three goals in the space of 13 minutes.

Andrea Belotti gave the visitors a surprise lead just after the 15-minute mark at the San Siro, but Ashley Young levelled moments after the restart before Diego Godin struck in the 51st minute.

Lautaro Martinez doubled Inter’s lead in the 61st minute as they went above Lazio in the standings.