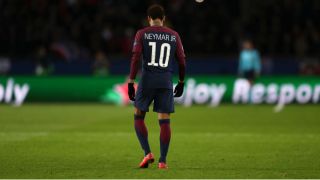 Florentino Perez has fuelled rumours linking Neymar with Real Madrid after claiming the Brazilian would have a better chance of winning the Ballon d'Or at the Santiago Bernabeu than at Paris Saint-Germain.

It was the second occasion – after 2015 – that Neymar has finished third to the pair, with Ronaldo and Messi still regarded to be some way ahead of him.

His world-record €222million move from Barcelona to PSG was said to have been completed with the intention of boosting his chances of winning the Ballon d'Or in future years.

But Madrid president Perez thinks Neymar would have better luck at the Bernabeu.

"Being in Madrid would make it easier to win the Ballon d'Or," Perez is quoted as saying by Marca.

"Real Madrid is a club which gives all you need as a big player, everyone knows that I already wanted to sign him at one point."