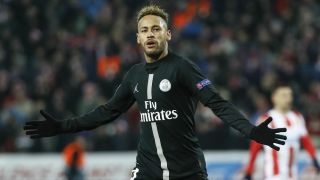 Paris Saint-Germain reached the Champions League knockout phase as winners of Group C thanks to a 4-1 victory over Red Star Belgrade.

First-half goals from Edinson Cavani and Neymar, a second-half header from Marquinhos and a late Kylian Mbappe strike were enough to send Thomas Tuchel's side into the last 16, despite Marko Gobeljic's finish 56 minutes in.

The result, combined with Liverpool's 1-0 win over Napoli at Anfield, means PSG claim top spot in their group, with Jurgen Klopp's side joining them in next Monday's last-16 draw.

PSG took the lead nine minutes in, Mbappe bursting past Filip Stojkovic and squaring the ball for Cavani to tap in from six yards out.

Red Star responded well to the setback but only good saves from Milan Borjan stopped Mbappe and Neymar from adding a second goal before the half-hour mark.

But there was no stopping Neymar from a dazzling finish five minutes before the break, the Brazil star collecting Mbappe's reverse pass, driving into the box and leaving Borjan on the ground with a dummy before firing home.

Red Star improved after half-time and deservedly got a goal back through Gobeljic, who volleyed expertly past Gianluigi Buffon at the near post, and the visitors looked to be unsettled for a time as the home fans roared their approval.

However, a fine free-kick from Angel Di Maria was powered into the net by an unmarked Marquinhos 16 minutes from time, and a clinical low strike from Mbappe in the closing seconds secured PSG's place in the next round as they ended a four-game winless run away from home in the competition.

What does it mean? PSG top and growing in strength

If the 3-2 loss to Liverpool on matchday one showed PSG's shortcomings, their form since that trip to Anfield has highlighted their developing quality under Tuchel.

A pair of comfortable victories over Red Star, two hard-fought draws with Napoli and a revenge win over Liverpool have all suggested this is a team adjusting to the system and demands of their head coach.

Crucially, of course, their latest victory in Serbia means they progress as group winners, giving them a better chance of a favourable draw in the next round.

Verratti in command as PSG conquer

Red Star had gone 32 games at home without defeat at Rajko Mitic Stadium until PSG's visit, but they have rarely had to deal with a midfielder in the same form as Marco Verratti, who dictated the match from start to finish in combative, elegant style.

Stojkovic would have been a little red-faced after Mbappe raced past him for PSG's first goal, and he never quite got to grips with the fluidity of the visitors' attack, even if they were not quite at their best.

Before PSG find out their last-16 opponents in Europe, they travel to Dijon for a Ligue 1 clash on Saturday. Red Star, whose European campaign is over for this season, take on Cukaricki in the top flight on the same day.