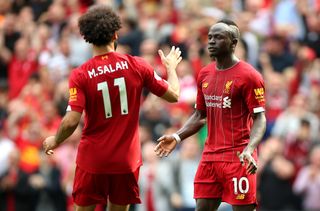 Sadio Mane and Mohamed Salah have settled their on-field differences and are ready to get Liverpool’s Champions League campaign up and running.

The Senegal forward showed a rare display of emotion when he was substituted at Burnley last month, furious that his team-mate had not passed to him when he was in a better position.

It led to suggestions that all was not harmonious between the pair, but Mane dismissed that when asked how his relationship was with the Egypt international.

“Good question. I think things can happen in football,” he said.

“I felt a little bit frustrated because it is football and you want to score more goals – you can see Man City score eight, six, seven.

“For the team, it was really important for us to score as many goals as possible.

“It can happen, he didn’t see me and I was frustrated. We are really good friends.”

In order to highlight the issue was now over, Mane said he was cracking jokes about it in the dressing room on Monday.

“(On Monday) I said, ‘Gini (Wijnaldum), tell Mo why Sadio wanted to beat you in the Burnley game’,” the forward added. “It is forgotten, all behind us.”

Mane and Salah, along with fellow forward Roberto Firmino, will lead the line at home to Red Bull Salzburg at Anfield as the Champions League returns to Anfield for the first time since the memorable 4-0 semi-final victory over Barcelona.

However, centre-back Joel Matip, a virtual ever-present this season, will miss out with a knock along with midfielder Xherdan Shaqiri.

“Both not available. It is not a big one (for Matip) but it is big enough. We don’t want to take any risks,” said manager Jurgen Klopp, who could not say at this stage whether Matip would be fit for Saturday’s visit of Leicester.

Goalkeeper Alisson Becker, who has been sidelined since the first match of the season with a calf injury, has a chance of making a return on Saturday, although a comeback against Manchester United after the international break looks more likely.

“There are two opinions. One is Ali’s opinion and the other is the medical department,” Klopp said.

“We have to wait, I think, so we have to see. Training is going really well but it was a serious injury and we don’t want to take a chance.

“(Wednesday), no chance, and then we have to see for Leicester. United game, probably 100 per cent.”

Salzburg top the group after a 6-2 win over Genk on matchday one, a game in which Erling Braut Haaland – son of former Leeds, Nottingham Forest and Manchester City midfielder Alf Inge – scored a hat-trick.

Haaland is a doubt for trip to Anfield after sitting out the weekend’s win over Austria Vienna with illness, but even if he does not play Klopp is not under-estimating their opponents.

“We have to start winning and we should not waste time. We have not even a little bit of feeling that the game is halfway done. It is not, it is tough,” he said.

“The way Salzburg is made is to surprise bigger teams. We need to win a home match any way and the pressure is greater. We don’t have a lot of leeway.

“We can’t wait for scoring points. We need to get points (on Wednesday).